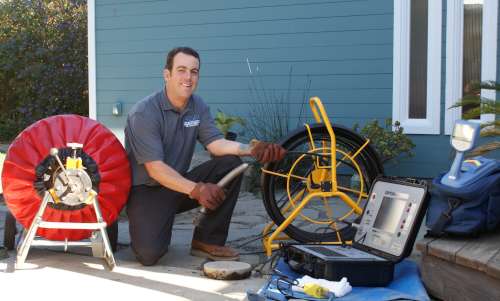 If you think that you have a clogged sewer line or backed up drain, Buddy Griggs Plumbing has all the experience and equipment to help with our drain cleaning service.

By using an inline camera system, we are able to diagnose the source of the problem whether it’s a blockage in the sewer lateral or a broken line.

The most common sewer problems are the result of:

Sewer and drain cleaning may also be needed due to:

In the event that a sewer line replacement is needed, we also offer trenchless sewer replacement that can greatly reduce the cost and time involved with the project.

Hear What Some Of Our Customers Say…

“John H., from Buddy Griggs, was awesome. He showed-up on-time, actually a little-early, and started working on our drain/clean-out in the front yard. The sinks and shower stalls started gurgling when a nearby toilet was flushed. The problem was with the clay pipe/drain from the house, out to the street. Roots were growing in-between the 6-foot sections of pipe, which eventually block the line. Bad news!!!! John used a snake to clear the bloackage, and indicated a jet-cleaning may be needed in the future. He was courteous, respectful, and knowledgable. If you ask, he’ll talk-you-through what-he-is-doing, and how-he-does-it. He cleaned-up after he was done. The next time I need a plumber, I will call John H. and Buddy G.! Thanks John!”

“Back up of main line in the two bathrooms…showers and toilets all backed up and not working. Called Buddy Griggs at 8 am and said that they could send a plumber out around 11. Johnny, the plumber, called at 10:15 and said he would be here in 20 -30 minutes and WAS! He assessed the situation, gave me a quote of which seemed reasonable, and went right work. He then used his camera to show me that the pipes were clear and pointed out a non emergency issues that might need addressing in the future.Johnny was great. He clean up his work space and made sure that everything was in working order Thorough, personable, quick, clean, and dog friendly.”